History of Unitarianism
The history of Unitarianism began during the Protestant Reformation of the 16th century in Transylvania, located between the Carpathian mountains on the eastern tip of Hungary. Transylvania was a cultural melting pot, made up primarily of Roman Catholics, but also home to Calvanists, Greek Orthodox, Lutherans, and Unitarians. In the years between 1530 and 1566, the country transformed into a Protestant society with the arrival of Lutheran missionaries and publications. Antitrinitarianism, the separation from Roman Catholic ideals about the holy trinity, strongly  influenced the population and many prominent figures began advocating for a broader definition of religious toleration. In 1561 the first and only Unitarian King, Janos Zapolya Sigismund, began his rule over Transylvania. In his attempts to quell conflicts between Roman Catholics and Antitrinitarians, King Sigismund issued the Act of Religious Toleration, or Edict of Torda, in 1568. This measure made the country one of the freest in the world, allowing for broader toleration of religious beliefs and securing King Janos’ place in history. The quote below is an excerpt from the Edict of Torda and shows King Janos’ feelings about religious freedom.

“Our Royal Majesty, as he had decided at the previous debates within his country about matters of religion, confirms as well at the present Diet that every orator shall preach the gospel by his own (personal) conception, at any place if that community is willing to accept him, or if it isn’t, no one should force him just because their soul is not satisfied with him; but a community can keep such a preacher whose teachings are delightful. And no one, neither superintendents nor others, may hurt a preacher by this or by the previous constitutions; no one may be blamed because of their religion. No one is allowed to threaten others with prison or divest anyone of their office because of their profession: because faith is God’s gift born from hearing and this hearing is conceived by the word of God- King Janos Zapolya Sigismund1

The word Unitarian means “one with God” and traditional Unitarian values incorporate the notion of Universal Salvation as well as the rejection of the holy trinity into their beliefs. When the Toleration Act of 1689 was issued by Catholic leaders in England, new threats to religious freedom became extremely dangerous. The act declared that anyone who rejected the holy trinity would be subject to death or exile. This act threatened Unitarians yet many continued to preach their message, often putting themselves in direct controversy with the Catholic Church. Unitarian minister Joseph Priestley was one such preacher who’s controversial message led to his home being burned down in 1791. Shortly thereafter he was run out of England and immigrated to America to help establish Unitarian congregations in Philadelphia, Pennsylvania. His efforts paid off, making him one of the most famous Unitarian leaders in American history. Unitarian minister William Ellery Channing was another Unitarian preacher who delivered a sermon called Unitarian Christianity in 1819 that helped give Unitarians a stronger platform in America. Under his leadership, The American Unitarian Association was organized in Boston, Massachusetts in 1825.2  You can read part of his sermon discussing Unitarian principles below:

“In the first place, we believe in the doctrine of God’s UNITY, or that there is one God, and one only. To this truth we give infinite importance, and we feel ourselves bound to take heed, lest any man spoil us of it by vain philosophy. The proposition, that there is one God, seems to us exceedingly plain. We understand by it, that there is one being, one mind, one person, one intelligent agent, and one only, to whom underived and infinite perfection and dominion belong. We conceive, that these words could have conveyed no other meaning to the simple and uncultivated people who were set apart to be the depositaries of this great truth, and who were utterly incapable of understanding those hair- breadth distinctions between being and person, which the sagacity of later ages has discovered. We find no intimation, that this language was to be taken in an unusual sense, or that God’s unity was a quite different thing from the oneness of other intelligent beings. We object to the doctrine of the Trinity, that, whilst acknowledging in words, it subverts in effect, the unity of God.”-William Ellery Channing3 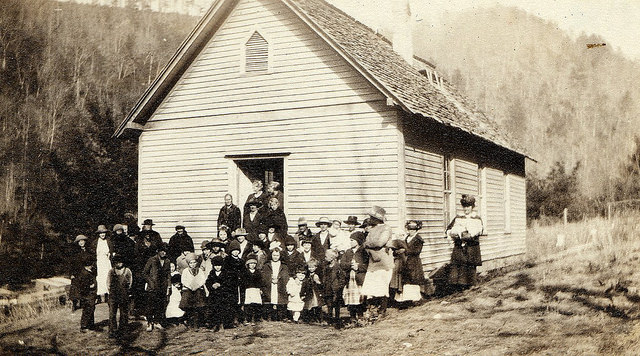 Inman’s Chapel was built between Canton, NC and Waynesville, NC in 1902 by Universalist preacher, Reverend James Anderson Inman. Their church became a very active advocate for social justice in the early 1900’s and continued to help members of the Western North Carolina region “Inman Chapel advanced a socially progressive ministry that included many firsts for the county and even for the state: a kindergarten, vocational training, a summer school, handicraft classes, adult education classes, a school for African American children, a library, and the county’s first free public health clinic.”6 After the Rev. Powell retired, the congregation began to decline, eventyally closing in 1927. However, Inman Chapel has recently been restored and can be visited today.

The 1930’s campaign to spread the Unitarian message around Western North Carolina was led by Walter S. Adams, editor of the Asheville Citizen Times newspaper. He worked to write about the religion and bring about positive, forward-thinking changes to religion in North Carolina. His writing sparked the interest of a group of ten Asheville residents looking for a religious alternative to the community’s conservative Christian churches. They organized the Unitarian Fellowship of Asheville on May 9, 1950 and through their efforts, they became an official member of the Unitarian Association in 1955. The congregation bought their first residence at 120 Vermont Avenue in West Asheville and held their first service on January 6, 1957. 7 “By the middle of the twentieth century it became clear that Unitarians and Universalists could have a stronger liberal religious voice if they merged their efforts, and they did so in 1961, forming the Unitarian Universalist Association in 1962.”8 After 15 years at the Vermont Ave. location, the Unitarian Universalist Congregation of Asheville moved to their present location on Edwin Place in 1972. Since their founding, they have been extremely active in the community regarding social justice issues and initiatives. “In 1977, a women and religion resolution was passed by the Association, and since then the denomination has responded to the feminist challenge to change sexist structures and language, especially with the publication of an inclusive hymnal. The denomination has also affirmed the rights of bisexuals, gays, lesbians, and transgendered persons, including ordaining and settling gay and lesbian clergy in our congregations, and in 1996, affirmed same-sex marriage.”10 The Unitarian Universalist Congregation of Asheville prides itself throughout the community as an open, welcoming place to congregate with other like-minded individuals and welcomes those of all walks of life to attend their services.